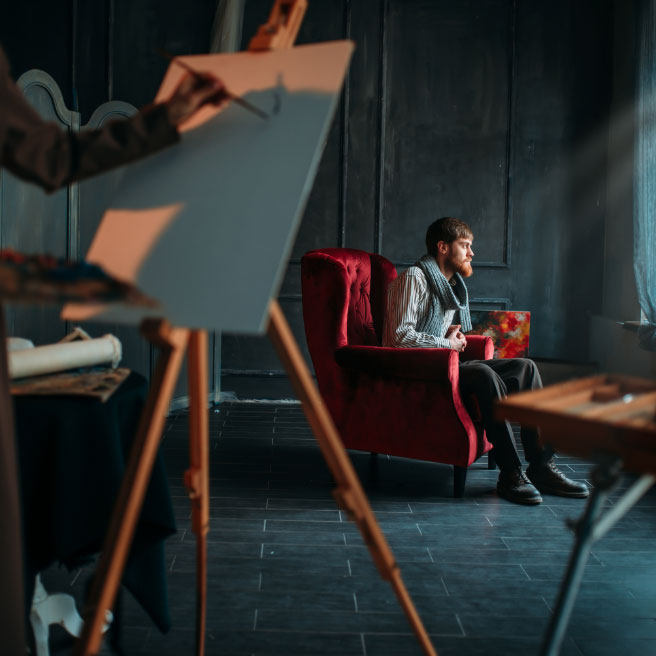 Always searching for the perfect combination, we love to create unique and personalised pieces, designed from scratch and made to fit the wrist. The mission that drives our work is to anticipate tomorrow, today, always in the spirit of this noble artisan tradition.
Our tailor-made service is what makes the Boglietti atelier truly special. Manufacturing and design meet your needs in the creation of unique, timeless pieces of history: pure substance that will fulfil your deepest desires.
For him, for her, for everyone. Because everyone has a story worth telling.

Seen from the outside, watches today don’t seem so different from how they were a hundred years ago. But beyond their shape and elegance, there is a soul inside consisting of gears, screws, levers and springs: a perfect combination of harmony and precision.
In our watchmaking workshop, which is officially authorised by the Maisons, we take care to preserve beauty over time, always guaranteeing a maximum of accuracy and precision. With their years of experience, their care for restoration and attention to the smallest detail, our master watchmakers will provide you with an excellent support and repair service and put their extensive knowledge of the trade at your disposal.

Availability, courtesy and professionalism are the values ​​that distinguish our atelier. Our greatest fulfilment is your complete satisfaction.

Our technical support is certified by ROLEX International and carried out in our laboratory, where art and precision go hand in hand.

Our technical support for jewellery is the result of experience and knowledge built up over years: from creation, through design to the manufacture of the jewellery, we know all the stages of production to make a unique piece that combines design with workmanship. Only those who know how to produce a jewel know how to make it last forever.

The Company “Ina Assitalia spa -” Contractor “Person, Entity or Company with which the contract is stipulated -“Insured”: person for whom the insurance is stipulated.
1) Insurance coverage is provided against material and direct damage throughout the world suffered by the purchaser of the individual object (hereinafter referred to as the insured) and caused by:
a) theft that occurred by snatching from the hand or body;
b removal from the hand or body by violence or threats to the person;
c) theft following a traffic accident, accident or illness;
d) theft that occurred in the Insured’s usual place of custody and/or in an occasional residence during the period in which it is inhabited by the Insured and/or in hotels;
e) theft by violence or threats to the person in the usual place of custody; and/or in the occasional residence during the period in which it is inhabited by the Insured and/or in hotels;
f) fire, no matter what caused it;
g) accidental breakage.The damage caused to the object when the theft or robbery or an attempt to commit them is deemed to be a result of the theft;2) The coverage for theft is valid provided that the thieves entered the places indicated at points d) above:
a) by smashing or breaking the doors, windows, walls, floors and ceilings;
b) by opening the locks of said doors or windows with lock-picks or similar tools and duplicate keys (not the same as use of real keys even if they fraudulent);
– by an avenue other than that destined for ordinary transit, provided that obstacles or shelters are overcome that cannot be overcome except by artificial devices or with personal agility;3) The insurance does not cover:
a) damage occurring during exceptional natural events, popular riots, rebellions, strikes, acts of terrorism, insurrections, martial law and civil war, unless the Insured shows that the loss had no connection with these events;
b) damage that occurred when the object was not being used by the Insured or his family members;
c) damage for which the Insured presents a deliberately false or fraudulent report of the incident ;
d) damage caused by simple flameless burns;
e) damage caused by fumes, gases or vapours unless they have developed following a fire;4) In the event of a claim caused by an event envisaged by this agreement which concerns the insured object, the insured must notify the Company by registered letter within 24 hours of becoming aware of it, indicating the number of this insurance certificate and providing all the information necessary to substantiate the claim The Insured will also have to communicate any fire and theft insurance concerning the contents of the premises indicated in the certificate. If it is a fire, the Insured is also obliged to keep the traces and the residues of the incident up to the payment of the damages. In the case of theft or robbery, the Insured should send the Company together with the notification a copy of the statement that the Insured is obliged to present to the judicial authorities of the place where the crime was committed.

5) The value of the object at the time of the incident is conventionally fixed at the amount in this certificate and the compensation will be equal to the aforementioned amount minus the excess indicated in the policy to be borne exclusively by the contractor.

6) The payment of the compensation is made at the headquarters of the General Agency of the Company to which the policy is assigned, provided that at least 30 days have passed from the date of the incident and a copy of the certificate that a complaint has been presented to the authorities and the certificate closing the investigation issued by the judicial authorities have been produced. The compensation will be materially carried out by the delivery to the purchaser (Insured) of a purchase-receipt voucher which can be spent exclusively with the Contractor for an amount equal to the value of the object less the excess of 10%.

7) For all matters not mentioned in this document the conditions of the policy stipulated between the Company and the Contractor apply.

It is good practice to provide an evaluation of any object only after having viewed it physically. We will be pleased to evaluate your jewel on the basis of the information provided online. Please fill in below form and we will contact you as soon as possible. Obviously, such evaluation won’t be binding for a future sale.

Login to Boglietti Gioielliere
Reset Password
Enter the username or e-mail you used in your profile. A password reset link will be sent to you by email.